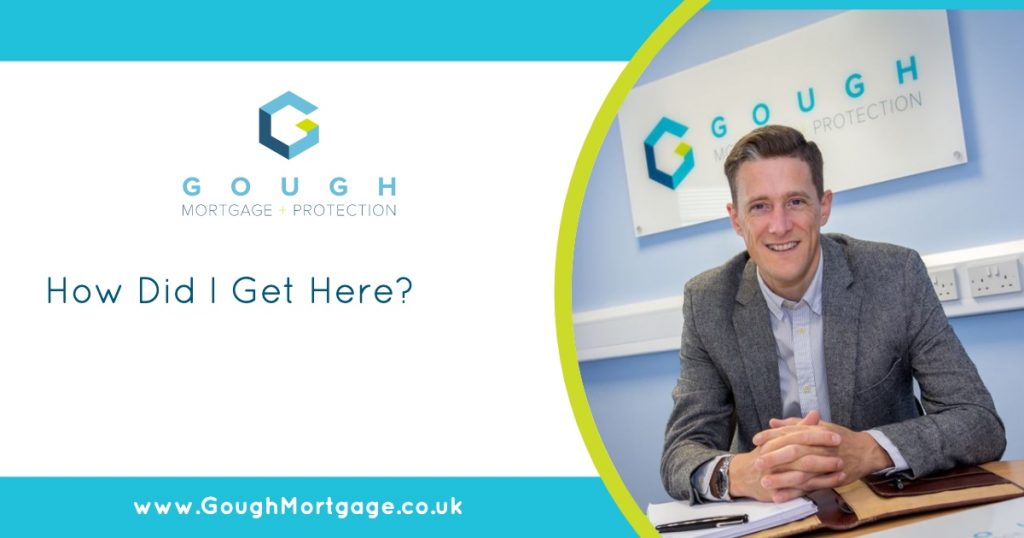 It’s natural to be afraid of something we believe to be risky or dangerous. Fear is an integral part of life. In some situations, it prevents us from harm. We don’t put our hand in a flame for fear of being burned.

But just as it helps us, fear can become our biggest obstacle. We fence ourselves in; we create a comfort zone and a safe little bubble for ourselves to live in. But most things worth having sit outside our comfort zone, on the other side of fear. Because of this fear, we often miss out on some of life’s greatest opportunities.

Before I started my own business and became Director of Gough Mortgage and Protection, that was me. I was missing out. I was living in a bubble. But in 2016, everything changed…

“Starting a business is harder than you think”

Before I dipped my toe into self-employment, I was working as a Mortgage Broker under the roof of another firm. But it wasn’t working for me. I wanted to control my own destiny. I wanted to see my kids more often. I wanted to work for four days and play golf on the fifth – you know – the easy life!

I didn’t have a grand vision, but I had goals, and I knew I needed to take control of my life and create a future where I could achieve them. So I did. After spending 18 long years working in the corporate world, I quit my job and became my own employer. They said, “starting a business is harder than you think”. And they weren’t wrong, but my mind was made up.

“I was more determined than ever”

After months of planning, research, and conversations with business coaches, Gough Mortgage and Protection was born. My business venture was becoming more real by the second, but the excitement didn’t last.

My very first case, for my very first client as a self-employed Mortgage Broker, was declined. After a few nervous days with my client, we got a deal approved by another lender. We’d survived our first hurdle and I’d lived to learn a lesson. This wasn’t going to be easy, but I was more motivated than ever to make it a success.

That’s when I started to work with Kimba Cooper, the all-smiles owner of Bristol’s best Digital Marketing agency.

After closing the deal for my first client and joining forces with Kimba Digital, things got better and better. By the end of 2016, we’d ushered in some fantastic business for Gough Mortgage and Protection. Things were great, but the time I was spending on admin was huge. I needed an administrator, but those doubts I’d worked so hard to shake off came creeping back. My accountant questioned the move, and my Dad also asked if I was sure. But after reminding myself why I’d thrown myself into self-employed life, I pushed fear aside again and made the leap. Then came 2017.

After suffering through the worst day for Gough Mortgages since the business launched, disaster struck. It was the roof. A £2,000 quote became £8,500 – my life’s savings – and just two months into a new year, everything I’d earned was gone. I was in debt.

By July 2017, I was working at home on Ikea dinner table and fighting to survive. I couldn’t afford an office, but despite all the drama, bringing in an administrator was starting to pay off. Stacey Martin helped take Gough Mortgage and Protection to the next level.

Just two months later, the company celebrated its best month to date. Business was booming, word was getting around, and Gough Mortgages and Protection was starting to make an impact. We were small fry, but we were making ripples.

By the end of 2017, the Stonebridge Mortgage Network ranked Gough Mortgages 93rd out of 280 firms and the snowball effect began. By March 2018, we’d smashed our personal best again. In May 2018, the amazing Stacey Martin passed her exams and became a fully qualified Mortgage Advisor. And in 2019, our incredible growth had made room for two more heroes – Kelly and Tracy – to join the team. Both initially as admin and business support, but we are pleased to confirm Kelly has now stepped up and is now a Mortgage Advisor alongside Paul and Stacey

By the end of 2019, Gough Mortgage and Protection ranked 52nd out of almost 400 firms operating under Stonebridge network. Its safe to say we are all pleased!

I’m no longer just self-employed. I’m the proud owner of my very own business, one of Bristol’s finest whole-market mortgage brokers, and I’ve never been happier.

“The only thing stopping you… is you.”

After 18 long years making someone else’s dreams come true, becoming self-employed, starting a business, and battling debt (all now repaid), I’ve built a trusted and successful brand. There are no guarantees in this world, and there’s no one route to success. But the one thing that always helped me? Saying “yes”.

I’ve still not reached the heights I’m aiming for. But had I stayed small – no Stacey, no office, and no investment in marketing – I’d still be working at that same Ikea dinner table, struggling to pay off my debts. Every penny I’ve put back into my business has been worth it.

If I could give you one piece of advice, I’d suggest you follow my lead. The further we push our limits, the bigger our comfort zone becomes. Don’t let fear hold you back. Do what makes you happy and throw all your passion into it, because that’s where dreams become a reality. The only thing stopping you… is you.

Posted in Uncategorised and tagged Journey, Mortgage, Our Story, protection
← Gough Mortgage + Protection – Is a 25-Year Mortgage the Best Option (Or Do You Need Longer?)Common Myths About Buying Your First Home – Debunked! →