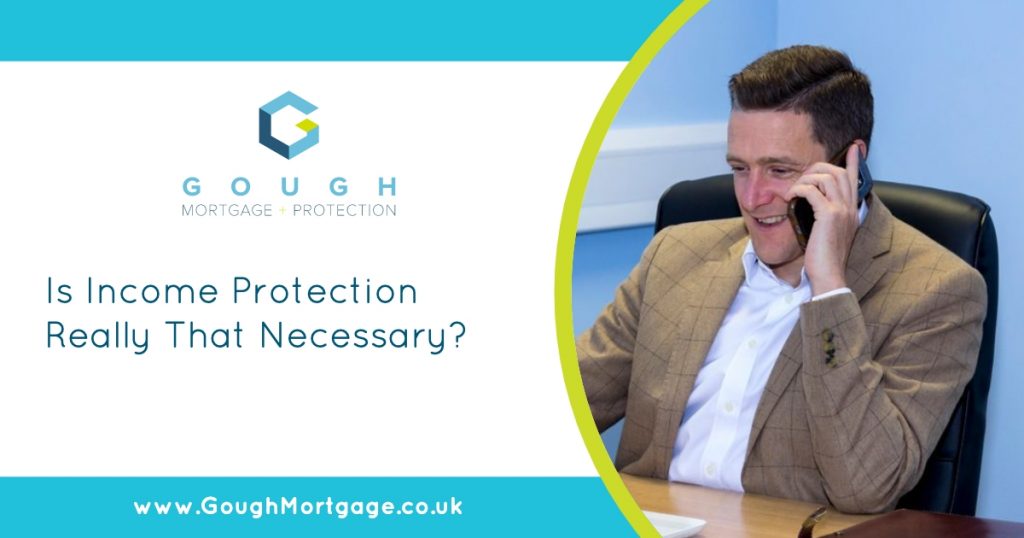 It can be tough to make any decision about anything in our modern world. We’re told we need everything there is to buy. Deciding what you need and balancing what you can afford is really tricky.

There are some obvious financial things that you must have in today’s world. These will probably include car insurance and a mobile phone contract, and of course you really should have a Will and perhaps some health insurance in case anything goes wrong. And don’t forget to put some money aside for a pension for when you’re older. Oh and you now need protection for that mobile phone, laptop, bike insurance not forgetting the small essentials such as Netflix !

Phew! Is there any money left?

There’s a long – possible never-ending – list of companies who say they’re important. They’ll tell you that their product or service is essential and much needed. When it comes to mortgages and buying a house you’ll find a few more, too…

Income protection is one of those ‘bills’ that you may have looked at and considered and then thought, “I’ll be OK”. Pensions used to fall into this category although with recent changes to retirement ages and the ageing population who are living longer, in a more expensive country, that trend does seem to be changing.

Income protection does get pushed to the back of the queue though. It’s seen as a nice to have and something that, when you’re young, you don’t need.

“I only work in an office. Even if I get hurt playing rugby, I can still go in.”

The worrying thing is… this is the norm. A lot of people avoid income protection.

“What would happen if?”

We know… it’s not great to think about ‘doom and gloom’ but with your home it’s very important. In a Zurich report it was reported that one in eight people admitted they would need to sell their home if they lost their income. One in six individuals admitted to having no disposable income, with a quarter saying that they had no savings.

Without income protection this large proportion of people would be homeless.

Positive thinking is great. It’s encouraged. But why take the risk on your home?

It’s no longer just common illnesses that could cause you to lose your job or take extended unpaid leave. According to Mind in their 2018 report, “life is getting tougher. The Mental

Health at Work report shows that financial worries and job instability have become part of daily life for employees; even for many in apparently good positions on higher salaries.”

More and more people are being affected by mental ill health, causing them to take long periods of time off work and also having to take a step back altogether… and it’s on the rise.

No income protection? You may find that your home is at risk in the long run, making things even more stressful when they don’t need to be.

Another misconception that lies firmly alongside the pension issue is age. Not old age, but young age. Many young people in their 20s and 30s do feel fairly safe without insurance to cover them. Foot lose and fancy free is all well and good until the unexpected happens. And it often does in your 20s and 30s.

What about the added pressures you’ll have on your earnings and any dependents you have or acquire?

Marriages and children may happen in your 20s and 30s, adding new responsibilities. Those dependents are relying on your wage to bring home the proverbial bacon.

“They can’t just take my home off me!”

It’s awful, but they can, actually. Although a mortgage company or bank will work with you and even freeze a mortgage in extreme circumstances, your home is at risk if you don’t keep up repayments.

You’ll have heard that statement before. It’s written on all mortgage agreements and even the blogs on this site. It has to be by law. Because it could happen.

Without protection it’s a very real threat if you start to struggle to pay for your mortgage, but many seem to think that they’re somehow safe because the world isn’t really that nasty.

During 2018, a total of 6.8 thousand homes in England and a further 777 homes in Wales were repossessed according to data supplied by Statista.

It could happen… in fact – it is happening to someone right now.

Is it necessary to have income protection?

We think so. There’s a sharp rise in mental ill health, more stress in the modern world and workplace, and a lot of uncertainty in the UK with the Brexit situation still very much up in the air.

There are no certainties in life (apart from death and taxes!) so you’d be wise to push income protection up to the top of your priority list…

… maybe prioritise it above that gym membership you don’t use or cut down on those double macchiatos!

As with all insurance policies, conditions and exclusions will apply.

Posted in Insurance, Mortgage
← Looking To Buy A New Build property? Three Ways The Government Can Get You On Your Way…Looking for a Mortgage? A 5-Year Fixed Mortgage Might be Your Best Move →

Get Widget
Scroll To Top